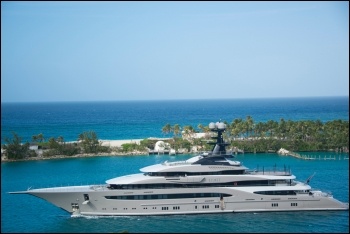 The Tories are introducing 'super-deduction' for the next two years before corporation tax marginally rises. For every £1 invested by businesses, they will be able to wipe £1.25 off taxes paid on their reported profits. This will go alongside a host of existing 'creative accounting' methods that already allow big businesses to avoid upwards of £90 billion in tax each year.

Super-deduction will reward large firms who are already doing well. If Amazon's delivery and warehousing arm invests in new kit at a similar rate to its capital spending in 2019, it will face zero taxes on its profits. Previously publicly owned utility, transport and delivery companies that have to regularly replace their infrastructure and vehicles, will simply be able to hang on to a greater portion of their profits.

As well as yet another indirect handout to big business, this latest 'corporate welfare' is a damning verdict on 21st century capitalism. Investment by British firms - that super-deduction is supposed to encourage - is stuck at historically low levels. It underlines the inability of capitalism to develop new technology without a massive leg up from government.

Free-market capitalism doesn't encourage innovation or healthy competition between businesses. The capitalist class is reluctant to stump up the cash to cut the time taken, or the environmental impact, of producing and distributing their products. Instead, they plough increasing amounts of their profits into rewarding executives and buying back shares.

Much better to replace this chaotic system with one based on democratic socialist planning, which can really begin to unlock the possibilities of technological advances to deliver for the working-class majority, not the big corporations.