A mockery of everything we've done 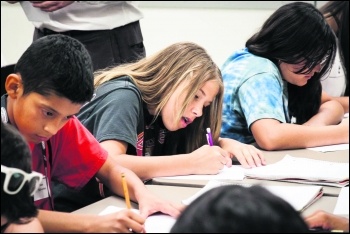 Schools opened on Monday 8 March, and we don't know if we are inhaling or exhaling. Here we go again - bubbles, disinfectant, and social distancing in tight spaces.

Staff have been diligently complying with lateral flow tests and mentally supporting one another, as we know each day we are at risk. We feel now we are going from the pond to the sea, with no in-between steps. As the gates have opened to all the children and classes have filled up, we can't maintain social distancing.

We truly believed - with all that we know so far - that Boris Johnson would, under no circumstances, open schools without children's return being staggered at least until the Easter break. We know the corona numbers will rise. It makes a mockery of the staff that have worked so very hard through lockdown and those having to shield.

A small number of staff have been vaccinated, while the rest of us know it will be months before we are. In my school year group, we have three adults off, and not nearly enough adults to contend with the amount of children coming in.

During lockdown, domestic violence has increased. And children have become more exposed to witnessing, and been victims of, emotional and mental abuse. We understand how crucial the next few weeks will be to highlight any vulnerable children, and get families the support they have lacked through lockdown.

Schools are the first port of call for safeguarding, and staff worry about so many children who are coming back to school who will need extra support with the change and experience they have had at home.

We expect to start the rest of term with media criticism, no financial support, no let up and with no priority for a vaccine. Happy Easter.

Canaries in the coal mine

Boris Johnson hypocritically warns that we must continue to be 'cautious', but the return to full opening of schools at this stage feels anything but cautious!

The vaccination programme, while well underway, has not yet reached school workers and many other key workers. We are vaccinated by age, but not for our jobs.

While vaccinating staff doesn't reduce child-to-child transmission, it would be a massive reassurance to those of us returning to classes of 30-plus pupils. Any social distancing has been abandoned in primary schools. There's only masks, open windows and hit-and-miss lateral flow testing between us and the risk of infection.

The victory won by education unions working together - forcing the Tory U-turn on full opening after Christmas - feels in the distant past. School union reps are left submersed in risk assessments, and battling to do everything we can to reduce the threat to workers from reopening.

Many school support workers have kept schools open for key worker and vulnerable children since 4 January. We've staffed bubbles larger than during the last lockdown. We now feel like the canaries in the coal mine of the Tories' economic 'road to recovery'.

The 'R' rate of infection varies enormously from region to region, and even between neighbouring boroughs. Where it still remains stubbornly high, the fear is that full opening at this point could trigger further infection spikes.

Councils, including those Labour control, express fear over 'big bang' opening. But they fall in line and claim their hands are tied by the government. Even though it's councils that run these schools.

Without the education unions using their full weight to force the Tories into a more gradual approach, we are returning on the Tories' terms, not ours. We must hope that school reopening does not lead to big spikes, but we will need to keep a close eye on the infection rate.

We cannot be left fighting school by school, if and when it becomes too unsafe for schools to remain fully open. The unions need to be ready once again to force the government back if necessary.

This callous government's 'thank you' to essential workers will be a further attack on our pay and conditions.

This proposal is nothing to do with helping children. The Tories' continued school cuts, alongside their reckless rush to full school opening, show that they regard schools primarily as a childcare service, not an educational one.

Extending hours will not improve education. Children, even more than adults, get tired. Concentration will not be maintained.

Compare England with Finland, consistently regarded as one of the highest achieving education systems. Pupils in England already spend almost an hour a day more in school, and get roughly half the summer holidays.

Instead of even more time enduring 'exam factory' conditions imposed on schools by league tables and Ofsted, school students after the pandemic need a 'recovery curriculum' that prioritises their wellbeing.

For their social development, children need leisure time and parents need time with their children. That means better pay and shorter hours, not Williamson's suggestion.

Youth and play services should be funded to provide additional support. But these have been slashed by council cuts.

Over 20% of new teachers already leave the profession within their first two years, rising to 33% within the first five years. If the government succeed in imposing even greater working hours, staff turnover will increase even further, damaging education.

Government figures show that teachers already work over 50 hours a week. Support staff are pressured into unpaid overtime too.

Instead of conditions being made worse, they need to improve. That's why one of the ten key points in my campaign to be the National Education Union (NEU) deputy general secretary (martin4dgs.co.uk) is for a national contract for all school staff that sets a genuine limit on overall working hours, not just teachers' 'directed time'.

Under current contracts, school employers cannot enforce a longer working day or year. Any move by Tory ministers to try and impose changed contracts must be firmly rejected.

Such an attack could not be fought school by school. Unions need to boldly respond with a clear warning that, if the government tries to enforce worse conditions, we will organise national action to defend staff and education.