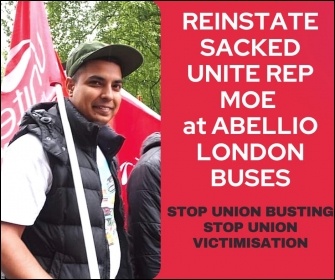 In the space of a couple of weeks, two bus driver union reps have been sacked - Declan Clune, RMT, at Bluestar in Hampshire (see below) and Moe Muhsin Manir, Unite, at Abellio in South London.

Both are members of the National Shop Stewards Network steering committee and both have built reputations for fighting for their members, particularly coming to the fore in the fight for workplace safety during the pandemic. Declan's appeal is 10 March and Moe is appealing against his dismissal which took place on 8 March.

RMT drivers at Bluestar were outraged at the news of Declan Clune's sacking by management, accused of bringing the company into disrepute for reporting a bridge strike to Network Rail. Many drivers at the depot have come forward to report other incidents of bridge strikes that the company has scandalously ignored.

It is a legal duty of any driver to report a bridge strike whether a bus driver or member of the public. To be dismissed in such circumstances is viewed by the Southampton RMT District Bus and Coach Branch as a union-busting attack on their trade union rights and passenger safety, which they are determined to fight.

Support has flooded into the campaign with over £2,600 donated to Declan's RMT branch fighting fund. Declan's sacking has been met with widespread support from RMT and other trade union activists, including invitations to speak at meetings across the country. This attack, alongside that of other trade union reps, is viewed as a concerted effort by employers to undermine workplace organisation as a prelude to attacking jobs, pay and working conditions.

In a more light-hearted indication of support for Declan, he was nominated by over 400 people as Bluestar's key worker of the pandemic in a company contest. The winner's name was to be painted onto the front of a bus. Needless to say the company has cancelled the contest as a result of the support for Declan.

The company has been rattled by the strong backing for Declan and steps are now being taken by the RMT to prepare for further action if he is not reinstated.