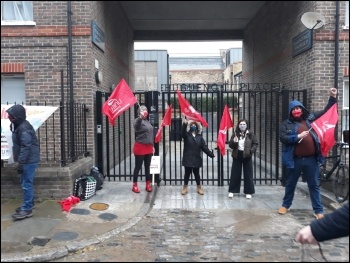 Tenant-referencing workers at the tech company Goodlord in east London were again out on strike on 12 March against the company's attempts at 'fire and rehire'.

The strikers, members of the Unite union tech workers branch, are employed on rolling fixed-term contracts. When Goodlord offered them their new contracts, a 20% pay cut had been applied so the workers are now calling for the restoration of their previous terms and conditions of the London Living Wage.

There was huge support for the picket line from tech workers in the Communication Workers Union, other Unite members, the NSSN, and eight members from three Socialist Party branches bringing solidarity.

The workers are proud to be out on strike and determined to win: "It's ridiculous what they are doing and we can't let them get away with it. We are fighting for everyone to stop this practice," said one.

We can't rely on the bosses to self-regulate fair pay, we need a £15 minimum wage now and we need an end to fire and rehire.

The workers are out on indefinite strike and the next picket line is 11.30am to 1pm on 18 March.