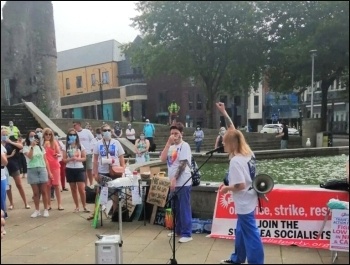 If my memory serves me well, I recall the One Show doing a 'vox pop'. The public were asked a number of questions such as: "Do you agree with free education for all? Do you like that we have the NHS?", and so on. They wrapped up the 'vox pops' by telling people "these are all socialist values", delivered as if they had been tricked or duped into believing in socialism.The tone was derisory to say the least, and churlish at best.

What shocked me was not just the surprise of people being interviewed: "Oh wow I believe in socialist values, oh my! What am I like?", but that the values they agreed with made sense!

It feels like we are boiling frogs, and with each eye-watering bung given to a Tory peer or hedge fund, we stand and watch. I was left thinking the world had taken leave of its senses.

Until one day, mulling around in Swansea before the pandemic, I came upon the friendly smiling faces of Gareth Bromhall and Linda Thraves from the Swansea branch of the Socialist Party.

I signed up there and then and, slowly but surely, I have attended our wonderful Zoom meetings, marched on behalf of the NHS, which I am proud to be an employee of, and tried to help Dave Warren unfold a table in the middle of Swansea town centre! I am also a candidate for the Trade Unionist and Socialist Coalition.

To me it makes perfect sense as we navigate the never-ending siege of corruptness. The Socialist Party provides a panacea of sanity, fairness and equality, and not just politically. I have the pleasure of knowing the friendliest and warmest people you could ever wish to meet, who just so happen to have a belting PA system, and the ability to organise, unionise and mobilise in the blink of an eye.

I am very proud to say I will stand, march and shake my placards at the unwitting citizens of South Wales.

So if you support your own kith and kin, and the community you live in; if like me you are ready for a change, and wondering what you can do, you would be hard pushed to find a better organisation to join than the inimitable Socialist Party.