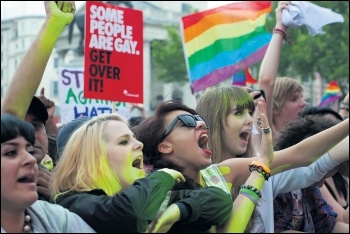 The Socialist Party LGBTQ+ group met on 14 March to discuss our programme on LGBTQ+ rights, and how we can intervene in the upcoming Pride season for these rights. The meeting was one of the biggest we've had, with attendees from across England and Wales, and 16 contributions during the discussion. The meeting involved many new Socialist Party members enthusiastically engaging in the discussion.

As with all political discussions in the current period, there was an emphasis on the impact of Covid on workers. For LGBTQ+ people, the pandemic has posed unique challenges. Through lockdown, some LGBTQ+ people have had to live with unaccepting family members or housemates, causing them to essentially be forced back into the closet.

Pre-pandemic, LGBTQ+ people were more likely to suffer from mental health issues, and this has been compounded by the toll the pandemic has had on mental health. Furthermore, the ongoing discourse surrounding trans rights has led to backward steps in the legislation protecting trans people, and current government consultations surrounding access to toilets threatens to further oppress trans individuals.

One of the main themes of the discussion was how we can link the struggle for LGBTQ+ rights to the wider problems in capitalist society and explain the need for a socialist transformation. One example of this was the question of LGBTQ+ venues, which are at risk of closure. Many people in the discussion raised how, during the pandemic, independent gay bars have been at risk of closing for good due to lack of revenue.

But the threat to LGBTQ+ spaces existed prior to the pandemic. The gentrification of areas has led to increased rents which are untenable for many small businesses. Furthermore, non-alcoholic LGBTQ+ services which were under council control have been closed alongside many other services due to cuts and austerity.

Austerity measures and cuts to services have led to a false belief that there is not enough money for the needs of all to be met, and that oppressed groups are in competition with each other for resources. We know that the money exists in society. However, it is being hoarded by the 1% while working-class people face austerity.

The meeting allowed us to discuss our programme, and boost new members' confidence in our ideas. We plan to develop our demands further in future discussions and publish a more detailed programme. We want the meeting to be reported in Socialist Party branches, as the topics discussed will help inform all of our work in the trade unions and other campaigns.