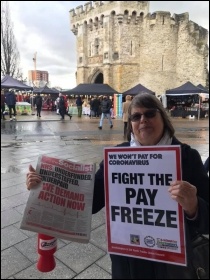 The National Audit Office (NAO) has recently confirmed in a report what we have warned for some time - that councils up and down the country face near implosion. A decade of austerity funding, coupled with the twin effect of the Covid pandemic, have brought this crisis out into the open.

The Tory government was able to get away with the reduction of local government spending power by a third between 2010 and 2018 as councils of every political colour failed to oppose them in any meaningful way. Instead, councils have 'balanced' their budgets on the back of vital services. Care homes, libraries, bin collections, public health, meals on wheels - all have been cut to the bone, and one million public sector jobs have disappeared.

Even so, the carnage continues. 94% of English councils expect to cut spending next year to 'balance' their budgets amid the Covid pandemic. Only one council, Croydon, went bust this year, but the NAO assesses that "25 more are at acute or high risk of financial failure and a further 92 at medium risk of insolvency."

No confidence in Tories

So what is to be done? The NAO says that "authorities' finances have been scarred and won't simply bounce back." It urges ministers to draw up a programme to stabilise councils' finances. However, we can have no confidence in a government that claims austerity is over but can only 'afford' an insulting 1% pay offer to health workers, while dishing out billions in lucrative contracts to their mates.

Raising the council tax by 5%, local lotteries and crowdfunding schemes, as proposed by the Labour council in Southampton, are also no way to rebuild our local finances. And council tax rises hit the working class in our pockets.

Workers need to draw up and fight for our own independent programme to restore the stolen millions, to rebuild our vital services and the million jobs that go with them.

That is why I and ten others in Southampton, including bus and health workers, carers and disabled, retired and shift workers, will be standing as part of the Trade Unionist and Socialist Coalition in the elections on 6 May.

We will be the only ones putting forward an alternative of a no-cuts budget, demanding the necessary funding from central government. However, to be successful this needs to be backed up by mobilising our communities to build a mass campaign. It's why a new mass political party of the working class, open, inclusive and democratic, needs to be built to represent the interests of working people, the poor, the vulnerable and oppressed.

A united fight involving our trade unions and communities could push the government back and start to rebuild our scarred communities.