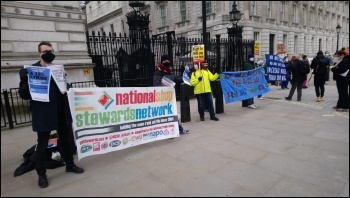 The problem with soundbites is that people have a habit of remembering them. Like Boris Johnson promising us a 'world beating' test, track and trace system. £22 billion pounds later and we are told by the Public Accounts Committee that there is no evidence that the scheme has actually reduced the spread of coronavirus infections!

This staggering failure you might imagine would have led to sackings and a rethink, but no. Instead, Sunak's budget handed another £15 billion to Tory pal and ex-telecoms boss Dido Harding, who runs the scheme.

People may wonder what this mega-expensive white elephant is for. That's easy to explain. Most of the work is contracted to private consultants, who don't have to have any experience and get paid up to £6,624 a day. In this way, lots of rich people get even richer, just like the killing they made from selling inadequate PPE to the NHS.

So, if the Tories reward failure, how will they reward the incredible achievements of health workers, who, despite resources being cut to the bone for years, have pulled off herculean efforts to manage the pandemic?

As we start to come out of this worst wave of infections, with record numbers catching coronavirus, being hospitalised and some sadly dying, we are told by the chancellor 'there's no money in the budget for you lot'.

Cuts to NHS services over decades have meant, among other things, that we faced the pandemic with a fraction of the intensive care beds of other European countries and record staff shortages.

The establishment press makes much of the 'heroism' of NHS staff, but an under-resourced and understaffed NHS has taken a heavy toll on health workers.

A recent NHS staff survey for England found a third of health workers were thinking of leaving, and 44% reported feeling unwell from work-related stress.

Also, part of the report contains shocking figures about the treatment of black, Asian and minority ethnic (BAME) staff - who account for 21% of the workforce. Despite NHS chiefs paying lip service to issue of race discrimination - highlighted by last year's Black Lives Matter protests - nurses from BAME backgrounds reported the highest levels of discrimination from managers for five years. This may well be a contributing factor to the 63% of Covid-19 deaths coming from this group of staff.

The other equally hollow soundbite we won't forget is the Tories saying they'd give the NHS whatever resources we needed.

Of course, the Johnson government has found huge sums of money to prop up big business in its budget. Therefore, the idea that there is 'only so much money available' for NHS services and paying us a decent wage is nonsense.

If health workers make a stand for a 15% pay rise and win, it will encourage other workers to get organised and fight for a better deal. If we back down now it will be a green light to the government to speed up privatisation and destroy the NHS.