Link to this page: https://www.socialistparty.org.uk/articles/32208 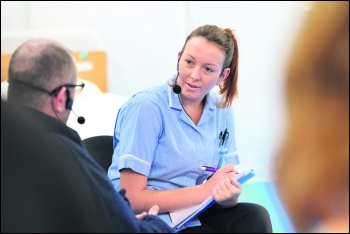 The Supreme Court has decided that the hours social care workers have to spend at work away from their homes on so-called 'sleep-ins' don't attract the minimum wage. This is a blow to the many thousands of low-paid workers in this sector.

But it is also another warning to the trade unions that relying on the courts to achieve key objectives will only succeed in the rarest of cases.

The judiciary is not independent. For the most part, it protects the interests of the capitalist economic system. If the decision had been in favour of workers, the estimates are that it could have cost social care providers £400 million. This is why the ruling came out in favour of Mencap and against the workers.

Sleep-in staff are those who are working on-call at night in homes and other establishments - sleeping on the premises - to deal with residents and service users who wake up and need assistance. They do not get a full night's sleep but are constantly waiting for the cough or alarm that could signal someone is in trouble.

The court ruled that staff couldn't be paid the minimum wage while they are not awake, even though they have to be on the premises. However, if anything goes wrong, they can be disciplined and even prevented from working in care again if they don't respond. How is this not working?

The unions will undoubtedly now call on the government for a change in the law, but unless this is backed up by a huge campaign it is likely to fall on deaf ears. The Socialist Party is demanding that a campaign should be launched immediately.

This version of this article was first posted on the Socialist Party website on 19 March 2021 and may vary slightly from the version subsequently printed in The Socialist.