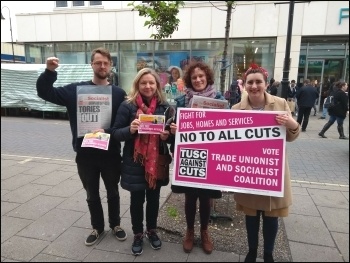 Socialist Party members are already out campaigning for Trade Unionist and Socialist Coalition (TUSC) candidates ahead of May's elections. In London it is vital that there is an anti-austerity socialist alternative to Labour Mayor Sadiq Khan and the Labour-dominated Greater London Assembly (GLA) as they continue attacks on workers' jobs, income and working conditions.

That's why TUSC is planning to stand 25 candidates in the London list for the GLA, and candidates in three of the constituency seats - to make sure everyone in London has the opportunity for an anti-austerity candidate. This stand requires a total of £8,000 in deposits. And we still have £1,000 to raise.

In Liverpool it is just as vital that TUSC stands in the Liverpool city mayoral elections, in opposition to the rotten cuts-making Labour council. To stand in this election TUSC will need to raise a deposit of £5,000. As a component part of the coalition, the Socialist Party needs your fundraising to help us pay our part.

Can you help make sure that we have the necessary funds to put towards TUSC's election deposits? £10, £20, £50, £100 or more, no matter what the amount it all helps to make sure we can fund a real anti-austerity election campaign.