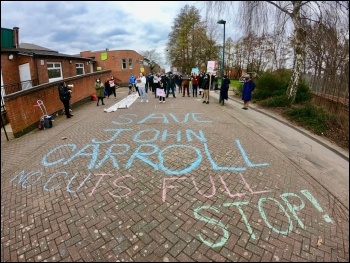 Over 50 people gathered for an online rally on Saturday 20 March for the 'Save John Carroll Leisure Centre' campaign (savejohncarroll.co.uk), showing our defiance to the council. Nottingham City Council voted to close the centre as part of its £15 million cuts in this year's budget. While some of the 50 Labour councillors abstained or didn't go to the budget meeting, not a single councillor publicly voted against the cuts. The council officer responsible for leisure, David Trimble, declared that we "ran a good campaign" as though we're going to wrap up now. We're not going anywhere!

One of the organisers of the campaign rightly declared that "the council just sees it as another subsidiary cost that they can just cut to balance the books. They don't think about it being a part of the community...they should be fighting for the community to their last penny". Another organiser and worker at the centre, who's been described as "a rare constant in a lot of deprived kids' lives", said that "people can't set up a gym in their back garden...we have nowhere else to go. John Carroll's the heart of our community".

We're now demanding the overwhelmingly Labour council reverses its decision and puts in the funding that the extremely deprived Radford community needs: not just keep the centre open but invest in it, fix it up, and reopen the community centre. Councillors have a choice not to make cuts. Pressure is being heaped onto councillors, who say they represent the community, from every direction, but this shouldn't be needed.

The Socialist Party believes that campaigns like 'Save John Carroll Leisure Centre' should prepare to stand their own candidates in the elections scheduled for Nottingham in 2023 to defend vital community facilities.