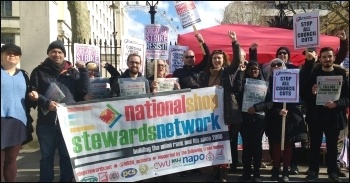 Figures show that 40% of workers in Enfield earn less than the London living wage of £10.85 an hour. Arif Bektas, speaking for the Turkish and Kurdish organisation Day-mer, estimated there are 10,000 workers from that background in the borough, many earning poverty wages.

Day-mer is in the process of working with Unite the Union in North London to organise these workers. Onay Kasab from Unite listed recent victories of workers in London, including Hackney parking wardens and school cleaners winning the London living wage through collective action.

Workers in the public sector also spoke. Kathy Smith, who helped to organise Unite workers win their eight month strike in Bromley libraries, explained the need for local authority workers to coordinate action with health workers on the issue of pay, as well as to defend services.

Many of the trade unionists in the meeting are preparing to stand as candidates for the Trade Unionist and Socialist Coalition in this May's elections on the London list for the Greater London Assembly (GLA), and in Enfield's by-elections. The point was made that workers' industrial struggle would be strengthened by a force in the councils and the GLA standing up for the working class.

Speakers reaffirmed their commitment to build the trade unions in Enfield, by organising the currently unorganised, and to forge links between existing trade union branches with the aspiration of establishing an Enfield trade union council.