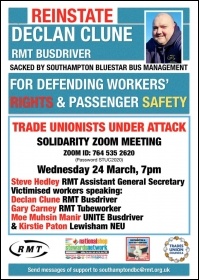 They are both speaking at a joint National Shop Stewards Network and Southampton and South West Hampshire Trades Council meeting on Wednesday 24 March on Zoom (Meeting ID: 764 535 2620 and Passcode: STUC2020). See next week's issue of the Socialist for a report and donate to their fundraising campaigns at gofundme.com.