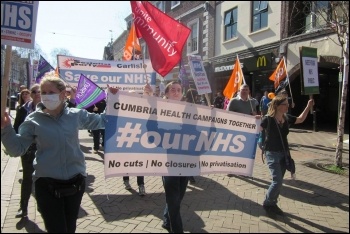 Cleaners, caterers, porters and switchboard staff at the Cumberland Infirmary are fighting for a decade of unsocial hours' payments that have been stolen from them.

This extra payment is very important to these low-paid workers. The Hospital Trust, Health Management Carlisle (the investment firm which owns the hospital) and Mitie - which took over the contract from Interserve - are all blaming each other. But somebody has pocketed the money earned by these essential workers!

Strikers have told us about bullying managers who deny them sufficient equipment, and serious concerns over hygiene. They have been refused overtime as punishment for going on strike, while agency workers are paid £20 an hour to cover their shifts! More than half of all domestics at the hospital are now agency workers.

The government's 1% pay rise is a kick in the teeth for NHS workers, who have already put in over one million hours of unpaid overtime during the pandemic after suffering a real terms pay cut of around 20% over a decade of austerity.

The 2.1% suggested by Labour is completely inadequate. The government has already set an inflation 'target' for the Bank of England of 2%. This 'offer' will leave workers just standing still. The SNP's 4% offer to Scottish healthworkers is also little more than a gesture.