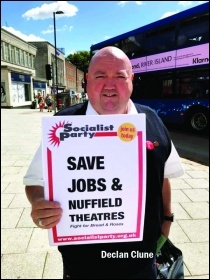 Bus and tube workers, teachers, trade union and trades council reps were there - it was an authentic voice of the best of trade union fighters, rallying in support of their own, victimised and sacked for standing up for health and safety and the jobs of their members.

We also heard from Steve Hedley, RMT assistant general secretary, who explained what a travesty it is for trade unionists to risk losing their jobs in this way, and pledged the full support of the union.

In Southampton we have closely followed the RMT branch's battle with Bluestar bus company which has increasingly targeted Declan for being an effective representative of local bus drivers.

We know that Bluestar has had to be led kicking and screaming to support and uphold health and safety issues, not least during the Covid pandemic.

That is why we are particularly outraged that Declan has been sacked for doing his duty and reporting a safety issue to Network Rail. This is not just about Declan, but is an attack on all trade unionists.

As we emerge from Covid, further attacks on jobs and conditions are planned by the bosses throughout the labour movement. It's Declan today but could be the rest of the workforce tomorrow. No one is safe if Bluestar is allowed to get away with it.

Declan had a 'directors' review' on 29 March and awaits the outcome. In the meantime, Declan remains sacked and the branch members are being balloted for strike action. We pledge our full support to push Bluestar back, and for Declan's reinstatement, and indeed for all workers who are targeted for the crime of standing up for their members and health and safety. This a battle we must win.