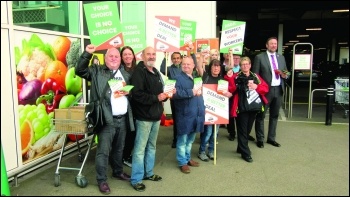 The Supreme Court has backed a 2016 employment tribunal decision that the supermarket's retail staff, many of whom are women, can compare their work to those in warehouse distribution centres.

More than 44,000 shopworkers say they should be paid the same as the predominantly male staff who work in the chain's depots, and who receive £1.50 to £3 an hour more in pay than the shopworkers.

The GMB union, which is backing the case, called the Supreme Court ruling a "massive victory". And the outcome will have repercussions for workers at other supermarkets, including Tesco, Sainsbury's, Co-op and Morrisons, who are also engaged in equal pay disputes with their employers.

Usdaw represents workers in these supermarkets, and the union's president Amy Murphy, a member of the Socialist Party, says: "This case represents a victory for shopworkers that can give confidence to workers at the other big chains.

The trade unions representing all these workers should fight tooth and nail to ensure equal pay for all retail workers."

The legal firm Leigh Day, which is representing the Asda shop workers, has said that if the five supermarkets lose the cases brought by the workers, they could be facing backdated pay claims totalling £8 billion.

However, simply taking the legal route, as is shown in the Asda case, takes an extremely long time with no guarantee of success.

The court cases should be waged in conjunction with action by workers, and unions should look to the example of the Glasgow equal pay strike, which saw 8,000 mainly female workers strike against the council, ultimately winning £500 million in pay for 13,000 council workers.