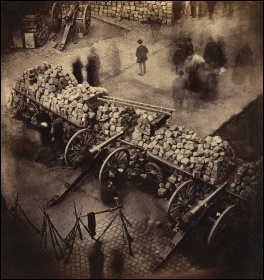 Members of the Committee for a Workers' International (CWI) from five continents took part in an online rally on Sunday 28 March. The event took place to commemorate 150 years since the Paris Commune, the first occasion the working class took power, and to discuss the lessons for today.

The rally was opened by Cécile Rimbaud of Gauche Révolutionnaire - the CWI section in France, who described the events leading up to the working class seizing power in Paris, and the gains during the six weeks of workers' rule. The Commune established universal suffrage, abolished night work and child labour, officials were only paid a workers' wage, and theatres and orchestras performed for free.

She described how the French ruling class helped to drown the revolution in blood, with 30,000 people massacred.

Cécile was followed by Peter Taaffe, member of the International Secretariat of the CWI. He explained how the experience of the Paris Commune led Marx and Engels to draw the conclusion that the capitalist state could not be taken over by the working class, but had to be smashed and replaced by a workers' state.

Peter explained the reason for the defeat of the Commune - the failure of its leadership to act decisively and defeat the forces of reaction. The most important conclusion was the need for a revolutionary party, armed with a strategy to act decisively, and lead the working class to victory.

As always, Peter brought history to life, using these events to illuminate the strategy for events facing us today. He drew out the strategy needed to defeat the military in the revolutionary upheavals in Myanmar where the military has massacred 400 people.

Unfortunately, not all revolutionary movements have learned from history. Steve Hollasky from SOL, the CWI's section in Germany, explained how the failure to learn the lessons of the Commune led to the defeat or the German Revolution after the end of World War One.

Tony Saunois, secretary of the CWI, closed the meeting by explaining how the capitalists will never be prepared to hand over power to the working class. Any hesitation, or attempt to carry through half a revolution, would give the capitalists the chance to seek revenge, as was seen in the brutal crushing of the movements in 1970s Chile, the Spanish Civil War, and Myanmar today.

We need to learn the lessons of the Commune and build the forces of socialism internationally, capable of arming the working class with the ideas and organisation needed to win the coming battles to overthrow capitalism.

The meeting was an inspiring tribute to the anniversary of the Commune, but also helped clarify the task we face in engaging with the intensifying political convulsions in society today. As Steve Hollasky said, "we are all Communards!"