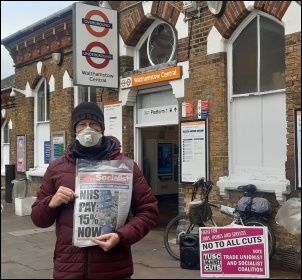 In the last few weeks, since the partial relaxing of lockdown restrictions, I have put on my mask and resumed regular sales of the Socialist in Waltham Forest, east London. I have sold 91 copies of the paper in seven sales so far, 51 of those have been using a card reader - every seller of the Socialist should have one!

Most of my paper sales are at tube and bus stations, areas where workers are on their way to and from work. There are four tube stations in my area that I rotate around.

I take posters with me and stick them on lampposts 50 or 100 metres in front of and behind me so that people know that they are approaching someone selling socialist ideas.

Hopefully they read as they approach, see the Socialist Party logo, and then they see our paper. Sometimes I write the slogans on the posters myself, but the Socialist Party produces lots of really good and relevant posters with slogans that resonate and get distributed for our members to use.

It is important that we do everything we can to try to make people feel comfortable, I try to start a conversation and talk to people about what they do for a living and so on. I always make sure that I have in my mind what kind of articles are in the paper so that I can relate it to what people tell me.

The main advice I would give to new sellers, is the same that was given to me years ago. And that is to remember that you don't need to know everything. It is fine to say that you don't know, and I often point people to our website where they are likely to find articles that the Socialist Party has published on the issue.

We have recently begun a weekly sale at Brimsdown train station - serving the nearby industrial estate. The area includes some big workplaces including an Amazon warehouse, two largescale bakeries, and many more distribution centres.

By selling in the morning before work we are able to meet workers both on their way to work, and finishing night shifts. So far we have sold to Amazon workers interested in getting organised, an electrician who had just been laid off, and a worker on her way to an interview.

With attacks on workers' pay and conditions set to further increase, we hope to be able to give confidence to workers to struggle by arming them with the ideas in the Socialist.