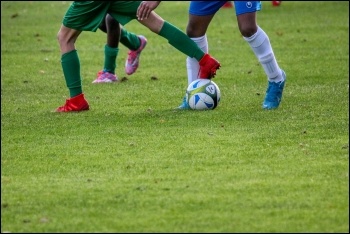 The fallout, with many ex-players feeling confident to come forward, including former England international Paul Stewart, led to then FA chairman Greg Clarke stating this was the "biggest crisis in the organisation's history". This resulted in Clive Sheldon's review.

For many survivors, four years was too long. Their public request for an interim report was not granted. There isn't just harrowing evidence in Sheldon's report of sexual abuse of children by prolific paedophile coaches who operated at professional clubs such as Barry Bennell. There is also evidence of what happened to survivors afterwards as they struggled with trauma causing addiction, relationship and family breakdowns, suicide attempts, as well as damaged football careers.

Sheldon's report has had a significant impact. Disgracefully, it was only its publication that forced public apologies from some of the seventeen professional clubs that are named. Some of the apologies, like that of Crewe Alexandra, whose board still has links with those who ran the club at the time of the abuse by Bennell, are, in the words of survivors, "mealy mouthed".

Crewe says sorry, but with the qualification "if there were in fact any warning signs that ought to have led the club to do more". This is in response to Sheldon criticising the club for not monitoring Bennell despite a director getting police advice.

In one shocking part of the report, Dario Gradi, a famous coach and manager at Crewe and Chelsea, now banned by the FA for life, who worked with two abusers, Bennell and Eddie Heath, initially says to Sheldon that he does not regard someone forcing their hand down a boy's trousers as assault.

In January 2017, the Socialist raised the sheer scale of the problem of child sexual abuse in football. The report confirms this. Police Operation Hydrant has dealt with 600 survivors and 240 suspects. We also raised concern at football's governing bodies and their corporate nature running an inquiry, and called for a genuinely independent inquiry involving survivors groups, players and football unions, and the wider trade union movement.

The correctness of this stance has been borne out by the serious weaknesses of this inquiry and that of clubs since the media gave coverage to the issue. Neither involved survivors in working out a remit.

Abuse survivor Ian Ackley, one of the very first to come forward in the powerful 1997 Channel 4 Dispatches documentary 'Soccer's Foul Play', said the report was as "dilute as Vimto for two-year olds".

He also points to a key weakness in Sheldon's recommendations, that of how an infrastructure around child protection in football will be funded despite massive big business profits by sponsors. Sheldon even only recommends that staff trained in this field are employed part time at non-league and amateur level.

Many ex-player survivors also rightly point out that Sheldon is too soft on both the clubs and the FA, using the historical context that public awareness of child abuse in sport and wider society was lower in the 70s, 80s and 90s. Despite sizeable evidence contained in the report about warning signs from expert academics, and many rumours and complaints about inappropriate behaviour, at that stage survivors did not feel confident to disclose sexual abuse around abusers at clubs.

The report uses contradictory language. On the one hand there are "institutional failures" at the FA, which gave little priority to child protection. But this is down to "naivety" and was still ahead of other sports. This does not make clear enough that the FA's priorities were driven in this period by corporate interests, the creation of the lucrative Premier League, World Cup bids, the new Wembley stadium and hosting Euro 96. Sheldon only makes recommendations to the FA and clubs. No independent body exists to regulate their actions in future.

Corporate priority over player welfare at clubs is also outlined in the report. Evidence is presented that Gradi lobbied Crewe for Bennell, who worked as a scout of players, to receive part of his financial commission from transfer fees when talented players were sold, despite rumours and concerns by directors about Bennell's methods.

Sheldon's recommendations are also weak about what support provision there will be for survivors in the future.

Football is big business-dominated, reflecting capitalist society. In such a profit-driven system there are power imbalances and limited democratic checks on who wields power.

The Sheldon report shows abusers often targeted the most working-class players and their families, using gifts and the promise of a transformed life of riches to groom children.

Fans, players and coaches need to reclaim our beautiful game. Football clubs should be run democratically under community ownership. They and governing bodies should be non-profit with the election of officials and coaches, subject to recall.