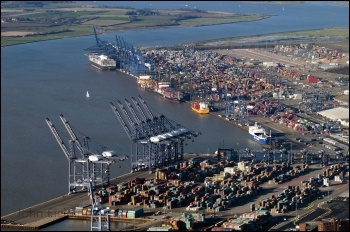 Eight new freeports in England covering Felixstowe and Harwich, East Midlands Airport, Humber, Liverpool City Region, Plymouth, Solent, Thames and Teesside, each potentially up to 27 miles across, were launched in Sunak's latest budget. His fanfare promises levelling up, but for workers it will mean deregulation, low pay and a continuation of the neoliberal race to the bottom.

Big business cheered the proposals, which Sunak said would have "different rules to make it easier and cheaper to do business". The Treasury spelt it out clearly: "The government intends to enable employers operating in a freeport tax site to pay 0% employer national insurance contributions on the salaries of any new employee working in the freeport tax site."

Freeports have been rightly attacked by Unite as 'sinkholes', with Unite general secretary Len McCluskey saying: "These ports stand in utter contradiction to the pledge to level up, and we will oppose them."

There is nothing new about freeports in Britain or internationally. They were first introduced by Thatcher in 1984 but phased out in 2012. The RMT maritime and transport union has joined the criticisms: "Freeports will create a two-tier workforce and turn these regions into bargain basements for multinational companies to enjoy increased profits at the expense of workers' safety, employment rights and public services.

"This is no model for sustainable economic growth and handing control of ports to international conglomerates is casino economics."

Localised zones will not create new jobs but suck in work from elsewhere, fuelling deindustrialisation in some areas while piling greater pressures on areas already facing shortages in housing and services.

The government's measures are designed to shore up bosses' profits at the expense of workers, paid for by the state, as British capitalism continues its long-term economic decline and investment stagnation. Sunak's hopes for a "turbo-charged Brexit boost" are just that, hopes, as prospects for capitalism are a sharp and deepening crisis.

Unite points to the need for a trade deal with the European Union as a means to securing economic development while protecting jobs and working conditions. But the EU has offered no protection to workers through its discredited 'posted workers' directive', which has been another tool to undermine hard-won trade union conditions for seafarers and construction workers alike.

Socialist policies are needed to ensure full employment, a living wage and economic development. Trade unions need to argue for the defence of all jobs, pay and working conditions and be prepared to launch coordinated strike action to confront any attacks by the employers. That should be linked to a campaign to renationalise the docks and transportation as part of a socialist plan of production under workers' democratic control and management.

Such a campaign should link up with workers internationally where freeports and tax havens operate anti-trade union policies to maximise profits and drive down wages.

Local councils could play an important part in this fight. But Labour councils have welcomed these developments. Southampton Labour council leader, Chris Hammond, sits on the self-appointed Solent Local Enterprise Partnership that submitted the Solent bid.

Rather than fighting freeports, Labour councils are further undermining any democratic control of docks and transport into the hands of profit-hungry big business. This points to the urgent need for Unite to join with the RMT in developing a new mass workers' party to fight the freeports. Trade Unionist and Socialist Coalition (TUSC) candidates will be to the fore in arguing clearly against this continuation of the race to the bottom, with socialist and internationalist policies.