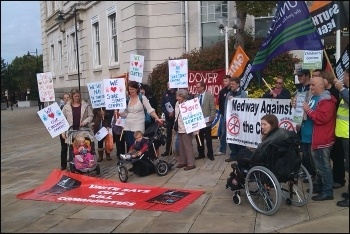 Demonstration against cuts to Sure Start centres in Kent, 19.9.13   (Click to enlarge)

Tory MP Andrea Leadsom announced her 'Start for Life' proposal last week. Her plan to establish a 'new service' for children up to age two is being trumpeted as an innovative service to address the inequalities suffered by the poorest children in society.

Sadly, the Tories have not had a 'road to Damascus' moment. The harm done to children, especially young children, is so evident, even the Tories are having to acknowledge it. The horrific damage suffered by a whole generation due to austerity and cuts for over ten years has been brutally exposed by the pandemic. In that time the number of children in poverty has risen to around 4 million, and 2.3 million children are living in homes with domestic abuse, severe parental mental health issues and alcohol and drug abuse.

The 'Family Hubs' Leadsom is proposing to deal with these enormous challenges is not a new service at all. At best it is a poor imitation of the Labour government's Sure Start Children's Centre (SSCC) programme. At worst it's a further reduction of what is left of these services after ten years of Tory cuts.

The development of SSCCs in the 'noughties', as part of Labour's strategy to eliminate child poverty by 2020, was one of the New Labour government's most progressive policies. It offered a universal service to support families with children from conception to five years, not just the 0-2 year olds that Leadsom is offering. Working with other services is also not a new idea, nor is registering births in a children's centre.

SSCC services were provided through multi-agency partnerships between education, health and social care services working together. But these well-funded centres offered so much more than just maternity clinics, child health clinics and parenting classes. They prevented the social isolation that many new parents and young children experience by providing opportunities and places for social as well as educational activities and thoroughly professional support.

No funding has been allocated for Leadsom's proposal but it's been given a high media profile. The fact that they are offering anything like this at all shows that the Tories are getting nervous. No doubt the local elections looming in May are concentrating their minds somewhat.