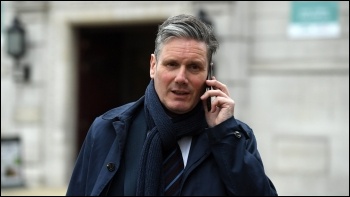 There I was, browsing my computer, as you do... when the landline rings. That is not something that happens very often in our house, especially as we have a call-barring service on our phone. "This is Lynne from the Labour Party", says the caller.

We haven't been members of the Labour Party since we were deemed 'too socialist' in the 1980s, so I asked how she had my number, and she said from the Electoral Roll. I thought this was odd but didn't question it further.

She said she was ringing round asking voters what is important to them, and my immediate response was: "No cuts!" "Oh, we can't do that", came the reply, "we can't set an illegal budget".

I spoke a bit about the huge achievements made by Liverpool City Council in the 1980s, and that we need representatives like that who are prepared to fight for us. She continued with the 'can't do that' refrain and not wanting to be surcharged. She then moved on to ask if I had ever voted Labour, and I confirmed I did when Jeremy Corbyn was standing, but added that even he was disappointingly weak on supporting and encouraging local councils to oppose cuts. I added that I was hoping to be able to vote for a Trade Unionist and Socialist Coalition candidate in the coming elections.

Having said all that, I was a bit surprised by her next question: "So what do you think of Keir Starmer?" she asked, and I replied: "He should be in the Tory Party!" There was silence, so I added "I think you know where I'm coming from" - and that ended the call.

The next day we received a newsletter from our ward Labour Party. The headline was "Labour's candidate for King's Park ward by-election on May 6 is Lynn Troughton", so that was who the caller was, if only I'd known - she would have had some questions from me!

One of the key issues in the newsletter was "new homes for locals", where it talked about three new developments across the ward and the provision of "34 new affordable homes, with 25 social rented and 19 shared ownership, as well as four for private sale (to cover the cost of providing social rent homes)".

This is the pattern in Hackney. Just up the road from us two council estates, made up of low-rise yellow brick buildings, set back from the road and with grassed areas and planting at the front, have been demolished. They were replaced with monstrosities built much higher and close to the road. They provide fewer properties at social rent than the original council homes on these sites.

In post-war Britain, when we had a massive housing programme of council flats and houses, never was there the excuse of needing to build homes for private sale to pay for it. Developers tell the council to jump, and the council asks: "How high?" Gentrification is a curse for the poor. As I said to Lynne Troughton, we need representatives who will fight for us and not cower in the corner.

Vote for candidates who will fight cuts and fight for us - vote TUSC!