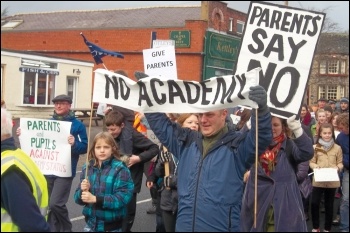 At Pimlico what you saw is what you got - I thought. Despite years of underfunding from Tory-controlled Westminster City Council, it didn't strike me as 'underperforming'. They were even celebrating improved exam results that year.

In the meantime, the headteacher resigned and was replaced for an interim period by an 'inspirational superhead', Jo Shuter, Tony Blair's favourite headteacher. So 'super' that she was expected to run two tough inner-city schools at the same time, Pimlico and Quintin Kynaston.

When she first addressed a parent's assembly in early 2007, I sat in disbelief as she slagged off the school claiming its weaknesses were even worse than Ofsted's findings. She was named headteacher of the year in 2007.

Forward to 2014 when she is banned from teaching for life over misuse of her school's funds (overturned on appeal three years later by a Department of Education panel). This included spending over £6,000 on her 50th birthday party, £8,000 on a single night's stay at a top hotel for her leadership team and £1,500 worth of furniture delivered to her home.

Despite organised protests from parents and staff and the vast majority of stakeholders opposing it, Pimlico converted to academy status in 2008. It was a done deal from start to finish. John, now Lord, Nash millionaire Tory donor, 'won' the bid.

I had witnessed a similar experience years earlier at Holland Park, the 'Eton of comprehensives', although academy status there came later. Recently walking past that school I found it unrecognisable. A posh new building that resembles the headquarters of a major investment bank, a symbol of the business ventures that academy schools have become under capitalism. Time to reclaim our schools as properly funded and democratically controlled comprehensives.