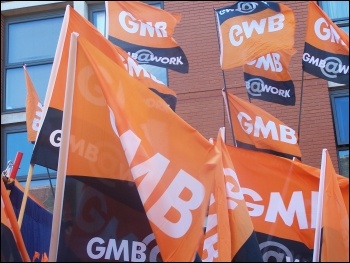 The GMB general trade union has begun the election process for a new general secretary. It is a year since the toxic environment around previous general secretary Tim Roach was exposed, and it is no accident that his regime opposed Jeremy Corbyn's leadership of the Labour Party.

This did not reflect the broad opinion of the activists within the union. The union bureaucracy's complete control was shown in the weeks after the GMB conference that endorsed Corbyn unanimously, yet GMB headquarters provided organisational support to the right wing in undermining his leadership.

It is clear that the bosses have used the crisis of the pandemic to attack our members' pay and terms and conditions, attempting to remove at a stroke gains that have taken decades to achieve - for example with the infamous 'fire and rehire.'

This is clearly only the beginning - the bosses and their allies in the Tory government will make our class pay for the pandemic and the mountain of debt that is accruing in the years to come. Simply hunkering down and waiting for some kind of 'boss-friendly' Starmer-led Labour party in 2024 is no way forward.