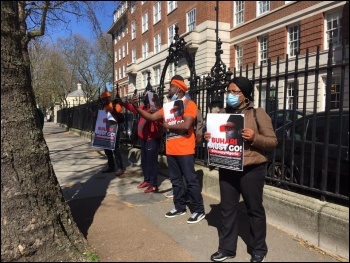 'Hypocrisy' was probably the most used word on the recent #BuhariMustGo protests in London. Having pledged to end the need for medical tourism, hated Nigerian president Muhammadu Buhari has once more left the country to seek treatment abroad, again in the UK.

Covid has exposed the deep crisis of healthcare in Nigeria. Having struggled on low wages and in dire conditions, doctors are now on strike to try and force the government to listen. They need decent pay and funding for resources.

While ordinary people worry about getting sick, getting treatment and losing family to Covid, Buhari has none of these worries. Thanks to his wealth, he can fly away whenever he wishes for healthcare, sometimes using public funds to fund the travel.

Hundreds protested in London. Socialist Party members at the protests were asked what Boris Johnson is going to do about Buhari being in London. We responded - very little. Boris Johnson can't be trusted to stand with working-class and poor Nigerians against Buhari's hypocrisy or corruption.

In the UK, the Tories have been responsible for the last decade of underfunding in the NHS. They tried to blame 'healthcare tourism' for problems in the NHS, but actually it's a product of their austerity.

None of the problems faced by ordinary people in Nigeria - accessing education, healthcare and decent jobs - have been solved. Movements, like last year's #EndSars against the corrupt armed wing of the police, will resurface as young people have no option but to take on the Buhari regime, and fight for a real alternative to corruption, oppression and poverty.