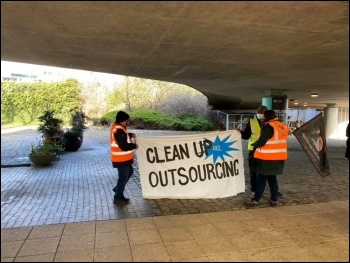 Members of the Cleaners and Allied Independent Workers Union waved flags and danced to 'Bella Ciao' and 'Mambo No 5'. Workers employed by Nviro Cleaning have inferior conditions to direct university employees.

One picket told Socialist Party members that he had cleaned UEL for 17 years. But when human resources announced new 'years of service' benefits, he was only credited for nine.

This was because he had transferred employer during that time - and despite 'Tupe' transfer law protections.

CAIWU will also be picketing the offices of Broadgate, a private office and restaurant complex, on Friday 16 April. Broadgate Estates is making cleaners redundant. The protest will start at 3pm at 12 Exchange House, Primrose Street, near Spitalfields, east London.