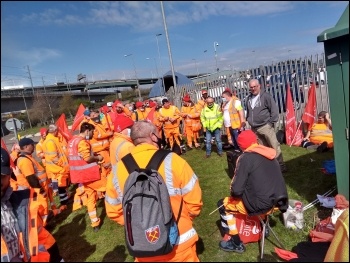 In the shadow of Dartford Bridge scores of Unite members joined a solid picket line on 13 April outside Thurrock Council's environmental services depot. This was the first day of three weeks of strike action provoked by the employer's plan to cut pay allowances (such as unsocial hours pay) to the tune of thousands of pounds.

At the top end a loader could lose up to £11k. At any time this would be an act of aggression, but after literally keeping the show on the road during the year of Covid, this is seen as an act of betrayal on the part of Thurrock Council.

Speaking to assembled strikers Unite officer Onay Kasab pledged the union's support for a win in this dispute, donating his own back pay to the hardship fund.

Morale was extremely high, partly because of the sunshine and the boombox (playlist was heavy on classic reggae and ska but also included AC/DC and Village People), but mostly because of the strength of the union's organisation and an understanding of the importance of winning the dispute.

If Thurrock get away with this, many other councils will be looking at saving their financial bacon at the expense of anti-social hours payments and other pay allowances that so many rely on - in the care sector as well as in cleansing and refuse.