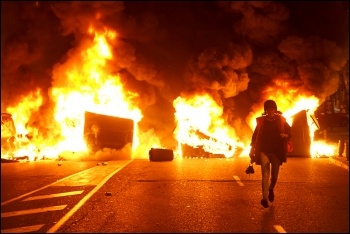 Images of young people rioting in Belfast and elsewhere, countered by police using water cannon, conjured up scenes from the period of the 'Troubles'. From the point of view of international audiences, Northern Ireland appears to have moved overnight from stability to imminent disintegration.

Of course, this is not a true reflection of reality on the ground. But the very fact of an appearance of such a rapid transition from one extreme to another belies the truth that political arrangements established under the Good Friday Agreement, and subsequently, have not resolved and cannot resolve the national question.

Tensions in Northern Ireland reflect the underlying change in demography that appears to be moving to a tipping point when Protestants will become a minority, and therefore threatens Northern Ireland's position in the UK. Alongside this, the continued failure of the Northern Ireland Assembly to deliver any real improvements in the economic and social conditions of the population has created an explosive mix. Social deprivation among the working class in both unionist and nationalist areas remains stubbornly high.

To avoid an immediate 'sea border' crisis, UK Prime Minister Boris Johnston negotiated a delay of three months on the imposition of 'sanitary and phytosanitary controls' (public health inspections) and a six-month delay on extensive customs declarations. But even these were not enough to avoid a political crisis.

Hard-line voices within unionism put pressure on the Tory government to suspend the protocol unilaterally. But the Tory government was not for turning. However, it was the AstraZeneca vaccine shortage which led to the European Union (EU) threatening to prevent EU-produced vaccines entering Northern Ireland. While EU ministers quickly retreated, the threat raised tensions further and exposed the duplicity of EU concerns for the region.

Tensions continued to mount. Posters, murals and graffiti went up across unionist areas against the hard sea border. Scrambling to recover authority the Democratic Unionist Party (DUP, the main unionist political party led by Arlene Foster), which had initially welcomed the NI Protocol as an opportunity for business - met with the Loyalist Community Council, representing Loyalist paramilitaries, to agree a common campaign against the protocol.

The spark for riots was the investigation by the Police Service of Northern Ireland into the attendance of senior Sinn Féin politicians, including deputy First Minister Michelle O'Neill and executive ministers, at the funeral of IRA leader Bobby Storey, during Covid lockdown restrictions. The announcement that the Public Prosecution Service would not prosecute these politicians deepened unionist anger.

The event became totemic among unionists as exposing the willingness of the police to turn a blind eye to Republicans breaking Covid safety laws that were strictly enforced on everyone else.

The reality is that Covid has become a sectarian football with both sides feeling aggrieved; nationalists demanded action when hundreds of Glasgow Rangers football supporters celebrated on the streets of Belfast earlier this year, apparently breaching Covid restrictions, while unionists were largely silent.

The initial riots were restricted to areas controlled by Loyalist paramilitary groups more openly associated with criminality and drug-dealing, but quickly spread. Riots reached a height on 7 April as rioters exchanged stones and petrol bombs over 'peace walls' in West Belfast.

As the situation began to spin out of control the nationalist and unionist political parties and paramilitary organisations sought to put a cap on the riots. Unionists used the death of Prince Philip to call for people to come off the streets. Their appeals clearly impacted, and while there were still some riots, they were markedly less extensive.

For socialists, the recent events should act as a warning. Neither capitalist nationalism or unionism offer a way forward to workers. On the contrary, both camps threaten a return to division, violence and even the prospect of repartition.

An alternative must be built. A glimpse of what is possible has been shown by the action taken by Metro bus drivers and port workers who, united across sectarian lines, walked off the job when they and their colleagues were threatened. Members of the Committee for a Workers' International in Northern Ireland - Militant Left - played an active role in supporting the workers' action. Padraig Mulholland, deputy general secretary of NIPSA union, addressed the drivers promising the workers' movement would fight any threat of going back to conflict.

The fact that attacks had targeted essential workers who had worked throughout the lockdown, increased wider working-class support against sectarianism and cut through the tensions, striking a chord for class unity with many across the board.

Yet again, recent events have confirmed that, even with small forces, principled socialists putting forward a platform of workers' unity can rally workers and cut across the rise of reaction.

To profoundly change the situation would require action from the trade union movement and the building of a mass party for socialist change.