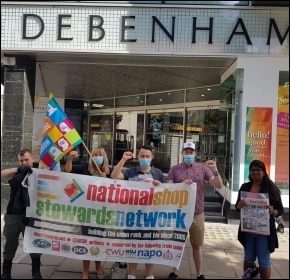 The Annual Delegate Meeting (ADM) of Usdaw, the retail and distribution workers' union, takes place on 25-26 April. Socialist Party members in Usdaw take a look at the changes taking place within the union.

Although the right wing in Usdaw has made gains in recent union elections, the results do not represent any enthusiasm for them, as shown by the fact that the right wing's preferred candidate for president, Jane Jones, received over 2,000 fewer votes than Socialist Party member and incumbent Amy Murphy when standing three years ago.

The new executive council (EC) is going to be very quickly tested as the current pandemic has churned up a whole number of issues. The Usdaw Broad Left has attracted new membership throughout the election campaign showing that there are members looking to get organised to fight back collectively, frustrated by the lack of lead at the top.

The pandemic has seen the accelerating deterioration of the high street with hundreds of stores closing and thousands of workers being made redundant. Union members, and those not yet organised in a trade union, are crying out for a bold campaign to defend jobs and call for nationalisation of struggling retail chains to protect livelihoods. General Secretary Paddy Lillis's 'tripartite' or partnership approach of trying to work constructively with bosses and the Tory government must be abandoned.

Even in Usdaw-recognised Tesco distribution centres, bosses have tried to implement fire and rehire tactics. Likewise, in Sainsbury's/Argos, where Usdaw is recognised, 3,500 job cuts are threatened. They wouldn't be able to get away with this if the membership was mobilised to face down such threats with strike action.

Also, with the massive profits reported in the supermarket sector, Usdaw is well-positioned to demand that workers rather than shareholders should be rewarded for working unflinchingly through three lockdowns. If, instead of piously trying to work with the bosses, the union leadership used the strength of the membership to demand £12 an hour for workers - recognised through this pandemic as key workers - members would gladly back up the demand with a preparedness to take industrial action.

Similarly, trying to work with the Tories is folly when already they have attempted to extend Sunday trading hours, have now allowed shops to open from 7am to 10pm, and have even refused to strengthen legislation protecting shop workers from abuse on the job.

Paddy Lillis and the right-wing majority on the Usdaw EC have consistently led members into a blind alley, backing the Blairite wing in Labour and seem increasingly out of step with the rank-and-file membership politically. Paddy Lillis reportedly resorted to ejecting three Usdaw EC members from a decision meeting to tip the balance in favour of backing Keir Starmer ahead of the 2020 Labour leadership election.

The right wing has also backed millionaire Blairite Anas Sarwar for Labour leader in Scotland, who has a position of ruling out another independence referendum for a lifetime.

Although there are those, even in the Usdaw Broad Left, who at this stage would not be prepared to back the building of a new workers' party, there is certainly growing support for this. One thing that is clear among members is the growing anti-Starmer mood that exists, combined with the record of the Usdaw right wing attacking Jeremy Corbyn's leadership, at a time when many members supported him.

At the very least, Usdaw members should be demanding that Labour candidates commit to policies which support the members or risk having union funding and support withdrawn. Labour councillors can stop implementing cuts and can empower union members by refusing to relax local trading hours without agreement from the workers' trade union representative.

It is vitally important that the developing anti-Starmer mood does not translate into the union being pushed in a direction away from political representation but instead looks to use the strength of the 400,000-strong membership to help any steps towards building a party that will represent the interests of the working class. The news that Amy Murphy, Usdaw president, joined the Trade Unionist and Socialist Coalition (TUSC) national steering committee, was generally warmly received, which shows the potential that exists for supporting working-class political representation when a lead is given.