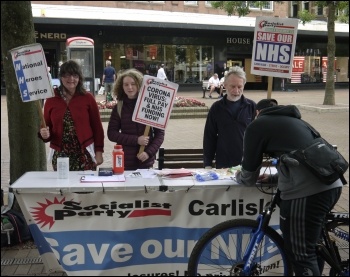 We had a very productive day of action in our Trade Unionist and Socialist Coalition election campaign in Carlisle. The local paper had carried an article announcing our street meeting in the Morton housing estate. It got a lot of interest from shoppers, with our banners, placards and megaphone. A big number of the shoppers signed our NHS petition, took election leaflets and bought copies of the Socialist.

We then moved on to the Raffles estate and did the same. Some of us ran the stall, talking to the residents, and meeting some young people who are now interested in joining the Socialist Party, while others delivered leaflets to half of the estate. Given the good weather, we were able to chat to residents in their gardens. One guy said he agreed with us on the need for a party for the working class, said he'd definitely vote for us, and asked his next-door neighbour if he would too. "Yeah, let's give the politicians one in the eye", he replied.

A big thanks to Graham Calvin, formerly Labour, now an independent socialist councillor, who came all the way from Copeland to give us a hand!