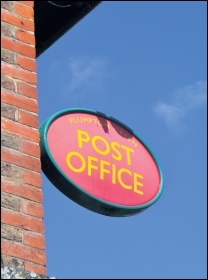 The judge said: "The failures of investigation and disclosure were so egregious as to make the prosecution of any of the Horizon cases an affront to the conscience of the court." But that judgment still leaves over 860 with false convictions.

The Communication Workers Union (CWU) has been tireless in championing their cause, and is now calling for a criminal investigation of senior Post Office figures who oversaw the criminalisation of hundreds of staff.

Post Office bosses and Fujitsu knew there were problems with the system, but told each of the 900-plus they prosecuted that they were the only one whose computer showed losses. Many who were prosecuted went to jail, and all lost their jobs and businesses.

The Post Office continued to waste money using expensive lawyers to try to defeat the workers, and to get a judge who listened to and accepted the workers' evidence barred from the case.

The scandal shows the need for trade union oversight, to prevent lives being ruined and millions of public money wasted. We need proper workers' control and management.