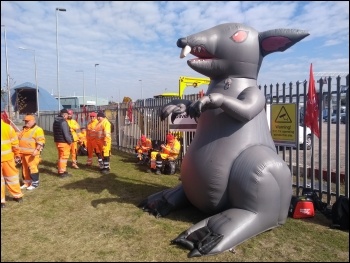 The Thurrock bin workers' strike has entered its third week even more solidly than the first. Spirits are high and the workforce is determined to win. The issue is the proposal to do away with anti-social hours payments which will cut pay by up to £4,000 for a loader and more for drivers.

The implications for refuse workers in other boroughs, for care workers and others who depend on these extra and enhanced payments to make a half-decent wage, are extremely serious. GMB care workers in Thurrock are also entering into dispute with this employer on the same issue.

The refuse workers union, Unite, is due to sit down with the employers this week. If the bosses know what is good for them they will cave in and do the right thing by these workers. If they don't, notice has been given that the strike will escalate from 10 May, with action starting at 6am rather than 9am, which will lead to a complete shutdown of refuse collections in the borough.

The current partial action has already led to the piling up of rubbish in the streets, and the union will be doing mass leafleting to keep community support for the strike high.

The union is opening up a hardship fund for drivers who will be dropping about £18 a day when the strike goes all out. The whole labour movement needs to get behind this dispute.