An unmitigated public health disaster is gripping India. The daily number of people infected with Covid-19 has exceeded 350,000 for a week - the highest of any country since the pandemic began. Health services have been overwhelmed. Dead bodies are lying outside hospitals. Patients are dying from a lack of oxygen supplies, forcing relatives to scour the black market to obtain scarce and exorbitantly priced bottles. Meanwhile, the Modi-led Hindu-nationalist BJP government isn't addressing the shortages of medical supplies by intervening in capitalist manufacturing. Instead, it has allowed unmasked and non-socially distanced mass election rallies and religious gatherings to take place, thereby spreading the pandemic.

Yuvraj of New Socialist Alternative (CWI, India) reports on this disaster, and why socialism is the only alternative. 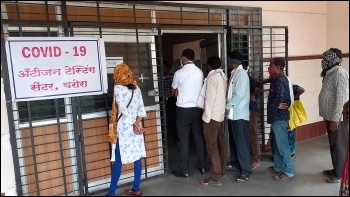 India's health system has failed to scale up in order to handle the current surge. Instead, it is simply melting down under the sheer pressure. Patients' families being made to desperately look out for beds is commonplace. Some families have travelled as far as 500 kilometres with patients in a desperate search for beds. Medicines, oxygen, and all kinds of supplies, are running short.

Doctors, nurses and medical staff are reeling under this acute pressure. Making matters worse, fires have broken out at hospitals.

Reckless implementation of neoliberalism over the past three decades has seen the healthcare system largely privatised. And a conscious policy of underfunding of the public health care system has seen it cut to the bone. The control of resources, under private ownership, has meant they are only put to use when profits are guaranteed.

At the start of the pandemic private hospitals kept aloof. They later joined with the public sector making their resources available - but only at prices that were simply beyond the reach of even the middle class.

The interplay of market forces serves the needs of capital but only at the cost of society. Take the example of critical medical supplies. India does have a relatively large-scale capacity to produce most of these supplies. It is the third largest pharmaceutical industry in the world by volume. But despite such a mammoth manufacturing capacity, we see acute shortage of drugs and a consequent hefty pricing for them.

The pharmaceutical industry in India is mainly geared towards exports and has been manufacturing primarily for its global clients, ie global pharmaceutical giants. The capitalist state largely doesn't interfere with the interests of private capital. Consequently, this manufacturing base could not be utilised to produce the medicines or other supplies needed to deal with the Covid crisis.

Take the case of the Oxford-AstraZeneca vaccine, for example. Building upon India's pharmaceutical manufacturing strength, the Serum Institute of India was selected for manufacturing the vaccine. Serum now manufactures millions of doses and supplies them worldwide.

Last year, prime minister Narendra Modi visited its plant and attempted to portray it as a nationalist endeavour. But all his pretences have now fallen flat. The pricing of the vaccine in India is now the highest in the world, costing Rs.600 (around $8) per dose. And this is when the company could make a profit even at price of $2, as stated by the owner of Serum itself.

BJP, the ruling party, now epitomises all the ugliness one could imagine of capitalist politics. While the government relentlessly preaches people to follow social distancing, the BJP has shamelessly flaunted even basic protocols when it came to mass gatherings, for its own political benefit.

One of the BJP-ruled states hosted Kumbha Mela - a large religious gathering that saw gatherings of literally thousands of devotees crowding together. These crowds, mainly from northern India, are potential voters for the BJP's Hindu nationalist agenda. Needless to say, Kumbha Mela became a Covid superspreader event, infecting hundreds of thousands. The massive election rallies in West Bengal (eastern state), hosted by the BJP and including the PM, have also contributed to spreading the disease.

The state and established political parties have thus been preoccupied promoting their own agenda or serving the interests of their masters, ie the capitalist class, while thousands are left to perish.

This is the ugly face of capitalism and hence the need to overthrow capitalism and replace it with socialism - a system based on public ownership of large-scale industry, with democratic planning of production geared to serving the needs of society.