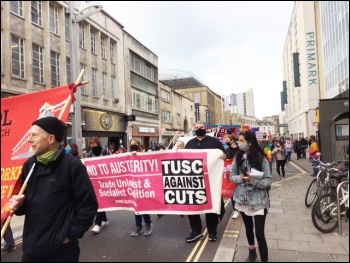 For workers threatened with being fired then rehired, young people facing an avalanche of job losses, people in local communities fighting yet more cuts in precious services, the choice on offer from the establishment parties during the elections has been woeful.

The recent 'cash for curtains' scandal has highlighted the web of cronyism and dodgy deals at the very heart of this government. Further exposures by Dominic Cummings are clearly in the pipeline. As one commentator put it: "Number 10 has started a petrol fight with an arsonist!"

Disgracefully, while an estimated £200,000 has been forked out on sumptuous furnishing for number 10, the brutal nature of this government has been further revealed. While Johnson lives in luxury compared to most working-class people, his government has pushed through a post-Grenfell Fire Safety Act, which will leave leaseholders liable for associated costs of removing potentially lethal cladding.

All this, alongside Johnson's alleged remarks during the pandemic, 'let the bodies pile high in their thousands', illustrates the callousness that runs deep within the Tory party. However, amid the growing crisis around Johnson, the Labour Party under Starmer has utterly failed to put forward policies to improve the lives of those facing an uncertain future. Instead, it is becoming increasingly clear that they too are prepared to act only in the interest of capitalism.

While the super-rich are raking it in, workers and young people are facing an uncertain future. But, with Starmer at the helm, the Labour Party is like a sinking ship, of no use to those wanting to fight for a decent future. Little wonder that by November last year it was estimated that the Labour Party was losing members at the rate of 250 a day.

Boris Johnson likes to portray himself as a 'cheeky chappie' libertarian, but his rotten Tory government is baring its teeth, attempting to give police even more powers to stop any protests. And remember, the Labour Party didn't initially resist the anti-protest bill.

Sometimes protest comes from unexpected sources. Fury has been unleashed by football fans over the greed of billionaire club owners. This, alongside young people involved in waves of resistance, including Black Lives Matter protests and 'Kill the Bill' demonstrations against the police and crime bill, are all indicators of future mass movements.

Alongside protests on the streets, we also need to build a mass party that represents us. The Trade Unionist and Socialist Coalition (TUSC) was set up as a vehicle to enable trade unionists, community activists and socialists to stand up and fight at the ballot box against the austerity measures being put forward by all the establishment parties. As such it can be a step towards a future new mass workers' party.

When we bring together the energy on the streets with the clout of mass workers' organisations we can begin to fight for a socialist alternative to the capitalist profit system!