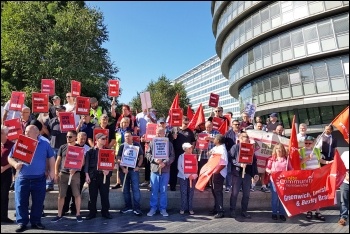 Unite has told London bus operator Metroline it has until 10 May to permanently drop its 'remote sign-on' policy - or it will face a summer of strikes.

A rolling programme of strikes by more than 4,000 bus drivers could take place in north and west London.

96% of Unite members at Metroline West and 97% at Metroline Travel voted for industrial action on routes in north and west London. Strike dates will be announced soon.

Remote sign-on means drivers do not report to a depot to start work, but meet their bus and begin work at an alternative location such as a bus stop. This reduces costs and boosts the company's profits.

In a letter to Metroline's managing director Stephen Harris, Unite's Mary Summers said: "Our members have made clear that they do not want remote sign-on - full stop. We are asking that the employer now confirms that remote sign-on will not be implemented. This is what is required to prevent industrial action. We will need to have this confirmed by the employer by 10 May."