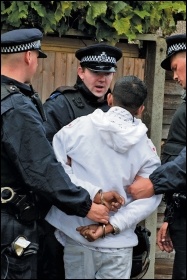 I was arrested at one of the 'Kill the bill' protests at Grey's Monument in Newcastle for trying to help a fellow protester. She was in great distress, and was being held onto forcefully and pulled by a police officer. I attempted to intervene out of concern for the younger girl, however this resulted in me being arrested for assaulting an officer by beating. My solicitor agrees this is a complete exaggeration, and that I am not a violent person. I acted out of concern for the girl - not out of aggression towards the officer, and I did not hit the officer.

During questioning, they asked me questions about the writing on our monument as people had expressed what democracy meant to them using chalk. I refused to answer these questions as it was not related to my charge, their intentions were to arrest people and give them a criminal charge for graffiti. Chalk is advertised as "washable" and commonly used by children, showing it is not the chalk that they have an issue with, but the messages that were written.

I was in police care for twelve hours, nine of which were spent in my cell alone. My solicitor was concerned for my welfare and unhappy with the lack of police cooperation. I was not allowed to talk to my Mam, and at night when I had asked for a blanket I was never given one... I am a juvenile.