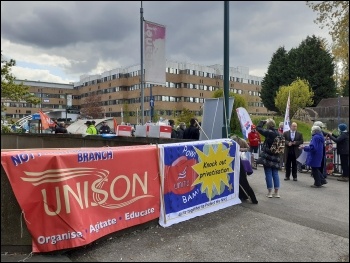 Members of two Unison Nottinghamshire health branches and Unite, RCN and GMB health unions held a lunchtime pay protest outside the Queen's Medical Centre on 1 May.

Despite different details between the unions' pay claims, all agree there must be a substantial deal. The government's 1% and Starmer's 2.1% don't begin to reverse ten years falling living standards.

Tom Hunt, chair of Unison Nottinghamshire Health branch, told the rally that events like this can build the confidence of NHS staff to take action on pay and build support from the public. A growing campaign of national joint trade union action is needed before the Pay Review Body reports in the next few weeks.