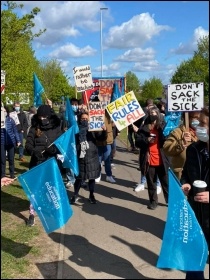 Staff at Beal - England's largest secondary with over 2,600 students - have been demanding: don't punish the sick!

Kevin Courtney, the joint general secretary of the National Education Union says: "We had been demanding that ill-health should be separated from the disciplinary process and the ending of a two-tier ill health policy. Looks like we have won on both demands."