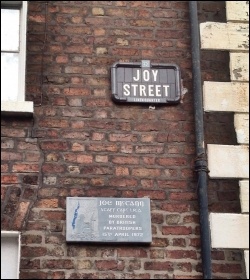 Two unnamed former British paratroopers, accused of the 1972 murder of Joe McCann, an Official Irish Republican Army (IRA) leader, were formally acquitted on 4 May. The trial at Belfast Crown Court collapsed after the Public Prosecution Service (PPS) confirmed it would not appeal against a decision by Justice O'Hara to exclude statements given by the ex-soldiers at the time of the shooting of McCann.

Judge O'Hara ruled there were deficiencies regarding the soldiers' statements given to the Royal Military Police (made without caution, for example) in 1972.

The HET concluded in 2014 that Joe McCann's killing was 'unlawful' and 'unjustified'. Yet this did not lead to an investigation by the Police Service of Northern Ireland.

McCann's family's campaigning eventually led to the Director of Public Prosecutions bringing charges. The family, who have fought for almost 50 years to get justice, condemned the judge using a technicality for the collapse of the trial. "This ruling does not acquit the state of murder. It does not mean that Joe McCann was not murdered by the British army. It is proof that the British army operated with impunity for their crimes".

The family said they will apply to the Attorney General to open an inquest into Joe McCann's killing.

The British establishment has always opposed criminal charges being made against soldiers arising from the 'Troubles' and other conflicts around the world. The ruling class does not want to be hindered from carrying out future military actions in the interests of British capitalism and imperialism.

An estimated 200 former members of the 'security forces' could face potential prosecution arising from the conflict in the north of Ireland. On 11 May, the Belfast coroner will deliver the result of an inquest into the killing by soldiers of eleven people in Ballymurphy, west Belfast, during two days in August 1971.

Johnny Mercer, who quit his post as the UK's 'veterans minister' in protest at the prosecution of former military personnel, attended the Belfast trial of the soldiers and welcomed the result. "Government must act," he demanded, calling for legislation to end prosecutions of former soldiers who were deployed in Northern Ireland.

Above all, Catholic and Protestant workers need a mass party of their own, with socialist policies, to struggle to end the bosses' system that causes repression and injustice, exploitation, poverty, and sectarianism.

After the failure of its military 'border campaign' (1956-1962) the republican movement moved to the left and became involved in the civil rights movement, and social and economic agitation.

But frustration at this 'political' role and the IRA's failure to defend Catholic areas in Belfast during sectarian rioting in August 1969 led to a split, into the Provisional and Official IRA. Joe McCann went with the latter.

On 9 August 1971, McCann's unit took over the Inglis bakery in the Markets area and fought British soldiers.

McCann was photographed during the incident, holding an M1 carbine, against the background of a burning building and the Starry Plough, a flag that had been associated with the workers' movement in Ireland. The image appeared in newspapers and magazines around the world. McCann was now high on the state's most wanted list.

Just weeks after McCann's killing on 15 April 1972, the Official IRA declared a ceasefire and largely abandoned the dead end of individual terrorism.

The political wing - Official Sinn Féin - eventually morphed into the Workers' Party, attracted a significant layer of youth for a period of time, but its reformist policies saw the party's support decline.