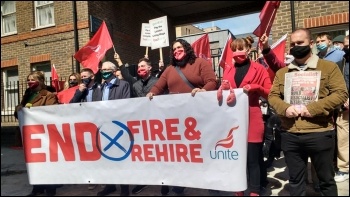 Seventy percent of people are opposed to 'fire and rehire' and want it made illegal. This number will only grow as this brutal weapon of the bosses, imposing worse pay and conditions on workers by sacking them and employing them on inferior contracts, is meted out to more and more workers. We've already seen blue British Gas vans piled up on car transporters after new contracts were imposed. Each van represents a sacked worker and their family.

The bosses tell us that we have to adhere to agreed pay and conditions if we find that we can't live on our wages - but they can just rip up our contracts to preserve and boost their profits!

For those union leaders who thought at the outset of the pandemic that there was a Covid national unity, fire and rehire is confirmation that workers have no common interests with the employers and their Tory government. No wonder Boris is ignoring calls to outlaw it. This bosses' united front wants to make workers pay the price for the Covid crisis. For British Gas workers, the price was up to £15,000.

Workers want a lead, but they won't get it from Starmer's Labour Party. It is reported that the Labour leader refused to sign Unite's letter opposing fire and rehire. Is this because he wants to continue to pose himself and Labour as 'business friendly'? Or is it because a Labour council in Tower Hamlets was shamefully one of the first to resort to it last summer, forcing workers to strike?