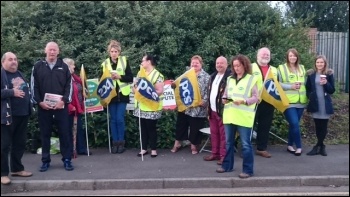 The PCS at the Driver and Vehicle Licensing Agency (DVLA) has suspended the first half of a two-week strike planned to commence on 17 May. The suspension is to enable talks with management to take place concerning the dispute over Covid safety in the workplace.

Management brought over 2,000 staff back into the workplace last September, leading to an outbreak of around 600 Covid cases during the second wave. Now, with restrictions being eased, they wanted to accelerate the return of more staff to the workplace over a period of two weeks, but have agreed to postpone this to facilitate talks. PCS is demanding that as many workers as possible are given the safer option of working from home.

DVLA management has been intransigent up to now, riding out two periods of strike action of four days each and refusing to engage in meaningful talks. They even threatened to call the police to clear away a legal, socially distanced picket outside the main DVLA site.

This is the same management that previously complained to the union about leafleting by Broad Left Network (BLN) supporters for the recent elections (see left) outside the DVLA contact centre. Ironically, this resulted in the Left Unity led leadership of PCS also attacking the BLN.

If talks fail to deliver a settlement, PCS plans to go ahead with a week-long strike from 24 May. For the first time in the dispute, this will involve all members - including those currently working from home - a strategy previously advocated by BLN supporters. Using the full strength of the membership, rather than just those required to attend work, is essential to bring sufficient pressure to bear on management and bring the dispute to a successful conclusion.