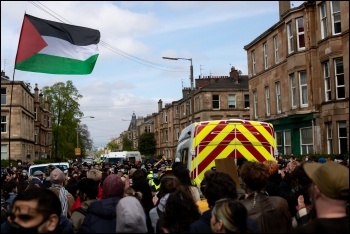 Thursday 13 May will go down in Glasgow history. Attempts by the Home Office to detain two Indian men - chef Sumit Sehdev and mechanic Lakhvir Singh - prior to deportation provoked a massive community mobilisation. For eight hours the men were held in the detention van, surrounded by protesters blocking the vehicle from leaving. After a prolonged standoff the men were freed. This was a massive victory against the racist immigration laws and practices of the Tory government. Andrew, a member of Socialist Party Scotland, who attended the protest reports.

At approximately 10am on Thursday 13 May the Home Office called for the police to help to complete a raid on the home of two Indian men living on Kenmure Street, Pollokshields, Glasgow. Neighbours had intervened, with one man lying under the immigration enforcement van to prevent it leaving - he would continue to do this for another eight hours.

Word quickly spread through the neighbourhood and on social media and the crowd grew. Within an hour what had started as a small-scale standoff with immigration officials had developed into a fully fledged demonstration, with an estimated 200 protesters by noon.

Initially, the van was guarded by 20 officers from Police Scotland, but they were gradually accompanied by an extensive caravan of riot police and horses posted on standby in the various adjacent streets. Likewise, the protest grew, doubling and tripling in size into the evening.

Local residents, as well as some anarchists, were distributing soup, water and apples to prepare protesters for the long haul. However, at around 6pm, Police Scotland eventually capitulated, citing Covid safety, and released the two men to cheers of triumph and the waving of Palestinian and red flags.

Activists and residents shouted chants through the day of "Let them go", "These are our neighbours", "Cops go home" and "Refugees are welcome here". Speakers contrasted the response of their working-class community with the Tory Westminster government's 'hostile environment' policy.

The recent revelation, that it is very possible that neither men were breaking any kind of law - immigration or otherwise - just demonstrates how needless and soulless the policy is. It is nothing short of systematic intimidation of migrant workers, on no other basis than their being foreign workers.

Many of the speakers attempted to express an 'inclusive nationalism' and spoke about how this situation proved the need for an independent Scotland. The demand that the Scottish parliament either takes or is granted powers over immigration from the Home Office - with their standing orders from Westminster Tories - is very popular.

But policing is already a devolved power in Scotland, and plays a key role in immigration enforcement! Even in an independent Scotland - if it was still a capitalist state - repressive policing and laws would be used against the working class. That's why socialist policies, including democratic trade union and community control of the police, are essential.

The events in Pollokshields were an inspiring example of the power of working-class communities when they come together to defend their own. It points to the type of mass action that can achieve victories and cut across racism in society. We cannot let up in the fight to remove all racist immigration laws and practices. We must continue to fight for a socialist society to end such barbarism and guarantee a decent future for all.