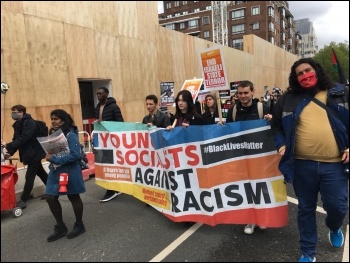 Despite the public outrage it's sparked, the government is ploughing on with the Police, Crime, Sentencing and Courts Bill - which would seriously impede our right to protest.

It's ironic that a bill designed to stifle protests has sparked countless demonstrations across England and Wales, and is likely to again if the Tories attempt to push it any further.

There is no doubt about their motives behind the bill. It is a pre-emptive strike against the anger that is likely to explode onto the streets in the coming months: anger against the government's appalling handling of the pandemic, rising unemployment, austerity, sleaze and corruption.

The right to protest is an inalienable one. Without mass movements, the working class would not have managed to secure many of the rights we benefit from today. The right for women to vote, the right of non-property owners to vote, the eight-hour working day and five-day working week, and more besides, were all secured through mass protests and struggle. Taking away our ability to protest is a threat to every aspect of our lives.

The Police, Crime, Sentencing and Courts Bill is also part of a broader attempt by the Tories to use the Covid pandemic as an opportunity to expand the powers of the state and undermine our democratic rights. Another proposal in the Queen's Speech is to introduce a photo ID requirement for general elections. This requirement could risk hitting older, disabled and homeless voters disproportionately as they are less likely to have such documents (see page 5).

However, rather than strengthening its position, such proposals simply highlight the weakness of the Tory government and its capitalist supporters. Johnson and Co. are clearly afraid of the opposition they will provoke as they attempt to make us pay for the cost of this pandemic.

Even if this bill passes, the working class will not stay silent in the face of austerity, unemployment and homelessness. We will not sit back and allow the ruling class to erode our democratic rights.

Since the start of the pandemic, the government has made U-turn after U-turn; let's use our right to protest to force another one!