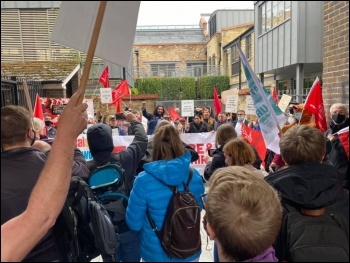 Property services company Goodlord, where workers have been on indefinite strike since 22 February, sacked the striking workers on 19 May. The company was trying to impose a pay cut, and has now ignored the legal protection against dismissal for strikers in the 12 weeks after a ballot. Therefore, the strikers have an extremely strong case for claiming unfair dismissal, and Unite has pledged to support them in this, starting with a mass picket outside the Goodlord offices on 25 May.

The members of Unite's London Digital and Tech branch reballoted on 26 April and voted overwhelmingly to continue their action. This ballot cited new issues, including the dismissal of strikers whose fixed-term contracts ended while on strike, the hostile environment strikers have been subjected to by the company, and the use of agency workers to undermine the effectiveness of their action.

The workers are currently discussing what action to take next, and Unite has said it will "consider all legal options to bring Goodlord to account for its breach of hard-won trade union rights."