The life and legacy of Bob Marley 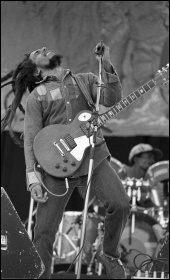 Forty years ago, on 21 May 1981, the island of Jamaica came to a halt as the celebrated reggae musician and political activist Bob Marley was given a state funeral. Hugo Pierre, Socialist Party member and black members' rep on Unison's national executive council (personal capacity), looks at the political backdrop which shaped Marley's music.

The opening track of the final album Burnin' (1973) by the original line-up of The Wailers, which included Bob Marley, articulated the militancy of oppressed black youth in Jamaica and in the UK, and reflected some of the preceding civil rights movement in the US.

The track 'Get Up Stand Up' is used as a chant that could have come from any demonstration against racism and brutality from Kingston to Harlem, to London, to Johannesburg during the 1960s and 70s.

Bob Marley drew on his experiences to put together an album that articulated the revolutionary mood in many black communities, and also the colonial revolution sweeping through much of the developing world, including Jamaica.

Jamaica had become independent in 1962, but under capitalism was forced into a slavish relationship with its ex-colonial masters. Many could no longer support living in the countryside in poverty and moved to Jamaica's capital Kingston, where they usually ended up in the sprawling shanty town of Trenchtown.

Once there, the conditions were often worse than those they left, having no ready access to even subsistence farming. Bob Marley, and fellow Wailer Bunny Livingston, moved as teenagers to Trenchtown to finish their education.

Marley quickly came under the influence of the developing Rastafarian movement through his musical connections with its philosophy of 'Pan-Africanism' and reverence for Haile Selassie I, the Ethiopian emperor.

The movement was brutally repressed in Jamaica (its founding base) under colonial rule, with beatings, torture and even executions. This continued after independence, with the state-sponsored murder of several Rastafarians during what became known as the Coral Gardens Massacre (Bad Friday) in 1963.

The endemic poverty and repression fuelled Marley's opposition to injustice and inequality. His mother moved to the US and Marley visited her there on at least two occasions. On his return from one visit he even took on the look of the Black Power movement by wearing his hair in an 'afro'.

He was also the victim of the ruthless Jamaican record industry, where artists, including himself, were treated as factory fodder. If they tried to become independent they would be isolated from radio-play by the big players.

Increasingly Marley's work reflected political concerns. He had been jailed in Kingston for a month on cannabis charges. The songs on the album 'Catch a Fire' reflect the strong anti-imperialist stance and the plight of the urban poor.

A new political movement was organising the urban and rural poor. Under the leadership of Michael Manley, the left-wing People's National Party proposed a radical programme to eradicate illiteracy, the appalling health conditions, and slum housing, and for job creation. The elections of 1972 saw Manley elected and Marley played a role in this election campaign.

Manley began to put his reforms into action. He also made international connections to protect Jamaica's bauxite (the raw material producing aluminium) production. His international ambitions for the 'non-aligned' world led him to forge ties with Castro's Cuba and take an anti-imperialist stance on the war in Angola against South African backed forces.

All of this brought Manley into conflict with US imperialism, so much so that arch right-winger Henry Kissinger, the US secretary of state, went to Jamaica to warn Manley off this relationship in 1975.

When Manley stuck to his grounds, Jamaica was flooded with guns by the CIA, the US spy agency. This led to petty criminals developing into political gangs backing the right-wing leader of the Jamaican Labour Party, Edward Seaga.

Bob Marley had now become an international superstar and a committed Rastafarian, who evangelised his beliefs in 'black unity' and peace at his concerts. His music mobilised the militancy of black youth, especially in the UK, wanting to fight racism and oppression, but channelled it into a spiritual solution rather than a political programme for action.

His song 'Rat Race' shows how he attempted to distance himself from politicians. However, his links to Manley's radical programme put him on the CIA's hit list.

Just days before the 'Smile Jamaica' concert, aimed at calming down the political violence in 1976, he, along with his wife Rita, his band manager and an employee, were the victims of an assassination attempt.

Manley won the snap election of 1976 and continued with his reforms. Manley's radical social reformism had the potential to popularise the ideas of socialist change, particularly among a militant generation of black youth.

Black members of the Labour Party Young Socialists, under the leadership of Militant supporters (the forerunner of the Socialist Party) seized the opportunity and organised a solidarity campaign aimed at doing exactly that in the UK.

The founding conference in 1978 adopted 'A Fighting Programme for Black Youth'. The charter called for a minimum wage, work or full pay, an end to racist education and for a fully comprehensive system, an end to racist policing and police harassment, nationalisation of any company threatening closure, and the nationalisation of the economy under democratic control to implement socialist policies.

This campaign mobilised hundreds of black youth and warned Michael Manley of the potential danger of not going further to end capitalism in Jamaica. Unfortunately, Manley did not heed those warnings.

As the Jamaican economy was battered by the world recession of the mid-1970s, Manley went to newly elected US President, Democrat Jimmy Carter, for aid. Instead of aid, Manley was forced into 'economic restructuring' by the International Monetary Fund, resulting in cuts to the reform programme and increased economic hardship. Manley subsequently lost the 1979 election.

Bob Marley's 'musical revolution' continued to proselytise Rastafarianism with 'Exodus', 'Kaya', 'Survival' and 'Uprising'. These cemented his musical legacy before his untimely death from cancer at the age of just 36.

His stand against injustice, racism and poverty are still a rallying cry across the world today. His spiritual movement is now an international phenomenon. But for socialists, the lessons of the period provide inspiration for a new generation of youth to learn the lessons: namely, that only a working-class movement with a socialist programme can end racism, neocolonial exploitation, poverty and war.