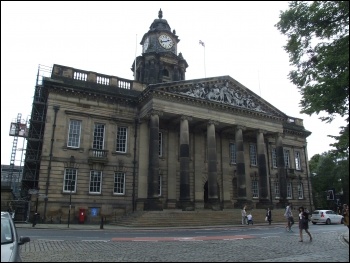 Last week brought more reminders that stopping global heating is incompatible with the capitalist profit motive. Even as transport and energy move to decarbonise, the petrochemical corporations are using their oil to ramp up the production of single-use plastics, in which the big banks invest 100 times more than in recycling.

The Tories are licensing new oil and gas fields in the North Sea. After their ten-year 'voluntary phaseout' of digging peat produced no change, they've extended it again until 2024.

Meanwhile the Greens, having recently benefited from Labour's decline by getting more councillors elected, now lead Lancaster city council - dependent on Tory support. The deal was that the Tories got the chairs of the council committees and the Green Party leader got to be the figurehead.

As the leader of the Tories explained: "The Conservative group shares many similar core values and vision", including "prudent economics". In other words, being prepared to carry out Tory government cuts to local jobs, wages and services. Three of the five ex-Labour 'Ecosocialists' are backing this, with one being elected deputy leader of the council with Tory votes.

Lancaster Labour councillors have tried to score points over this deal with the Tories, but Labour ran Cumbria county council in an open coalition with the Tories for four years, and now with the Lib-Dems, implementing Tory cuts.

Why did the Greens leave the so-called 'Progressive Alliance' with Labour and the Lib-Dems in Lancaster? Because the Greens' Caroline Jackson didn't like Labour's Dr Lewis's 'leadership style'! But where are the fundamental political differences? How does this help mobilise the local working class to fight for permanent, well-paid jobs in renewable or public services?

Faced with the return of the Labour Party to Blairism nationally under Starmer, some former Corbynistas have joined the Greens. But because the Greens 'can't wait for socialism' and so choose to operate within capitalism, they are forced to follow the logic of capitalist economics and politics. For all the well-meaning local 'projects' and a superficially different 'style', it's impossible to protect the environment from climate change - let alone workers' living standards and public services - by getting into bed with the politicians who represent the interests of the banks and big business.