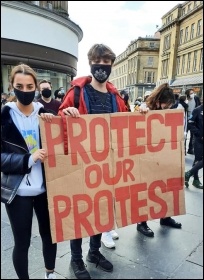 It's not a coincidence that the last time this bill was amended, was under Margaret Thatcher, who made the organised working class her enemy and pushed millions into poverty.

That said - the growing anger that already exists in society will not be so easily stopped. Covid has helped expose the rottenness of capitalism, which means misery for millions of ordinary people.

There has been mass protest already, against inequality, oppression and poverty. From all those who took a stand against the bombardment of Gaza by the Israeli government and their move towards a new war, to the protests last year as part of the Black Lives Matter movement, where working-class youth flowed onto the streets to protest racism from both the US and UK governments, and for a real alternative. As well as this, there has been a wave of strong and combative strikes against workplace victimisation and 'fire-and-rehire' tactics. And the movement against sexism and women's oppression.