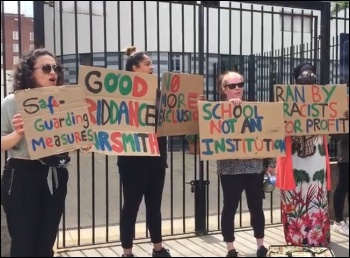 Parents at Pimlico Academy have picked up the fight against racism after students protested last term. The movement forced the resignation of the head teacher, among other concessions, but what happens now? The parents are demanding provisions such as proper training and support for teachers to help them deal with racism and sexual harassment in school, so that that all students at the school feel supported.

The parents also want a voice. As one put it, the head teachers might be gone, but the rest of the governing body remains. She went on to say: "We want proper engagement from the school and wish to elect two parent governors to ensure our voices are heard by the principal and the SLT (Senior Leadership Team)."

The school's very small governing body does not currently include representatives of parents, teachers or students. But it does include Lord Nash, who has threatened students with punishment if there are any further protests. The parents chanted 'Students, parents and teachers - unite and fight!' It was really clear on the protest that Pimlico Academy is an important part of the community. One of the protesters attended the school herself and now her child attends the school. She spoke about how much the school has changed in just a few years. A representative from the National Education Union came down to support the protest, and the parents will be supporting teachers taking strike action at the school.