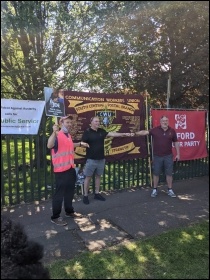 Socialist Party members witnessed an incredible atmosphere of solidarity visiting the Jacobs Douwe Egberts (JDE) factory picket line in Banbury on 5 June. Unite the Union has stood firm against the company's 'fire and rehire' tactics, achieving an 86% turnout in favour of a further four strike days in June.

Despite lockdown seeing a massive surge in profits for the coffee and tea industry, as more and more people brew from home, JDE is using 'fire and rehire' tactics in a brazen attempt to increase profit margins. For many years, Unite has negotiated good wages and conditions for the factory workers. Most of the staff we spoke to had worked in the factory more than 20 years. They enjoy their jobs and continued working during lockdown.

Yet it is those on the frontline, on hourly pay, who are facing annual pay cuts and contract changes. Some of the workers are facing yearly wage losses between £8,000 and £12,000! Many are having their pension plans torn up, and the factory is targeting women workers in particular, with dramatic changes to their contracts including night and weekend shifts.

Women workers who have family commitments are being told to accept the new terms or face dismissal. Workers reported being told to sell their homes if they cannot afford to pay their mortgages on these new terms.

Those on the picket line reported being filmed by management who have already dismissed one union activist. As numerous cars honked and drivers raised their fists as they passed, one long-term employee told us: "After 60 years of fantastic negotiations between Unite and the company, the factory has been thrown into its darkest days by corporate gangsters."

JDE spokespeople have claimed that the Banbury factory needs to 'modernise' and is 'uncompetitive.' When factory workers spoke with other factories in Germany, France and the Netherlands, they were all being sold the same mantra. Yet the bosses have refused to open the books and have any meaningful dialogue with the factory workers.

Publicly, the company is boasting that 50% of the staff at the factory will have pay increases. One worker on the picket line pointed out that some of these increases are as little as £40 a year, and many are only seeing higher wages because they are being forced to work more hours.

Significantly, the factory is doubling the number of management positions, and bosses already taking six-figure salaries will be seeing wage increases and bonuses of as much as £12,000.

The well-unionised workforce is not buying the arguments of the bosses and see these tactics for what they are - pure greed.