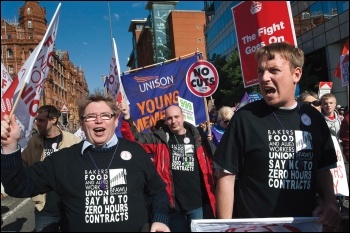 53% of members of the BFAWU bakers' union believe that the union should no longer be affiliated to Labour. Just 7% strongly believe that Labour still represents them.

These were the results of a survey of members launched in advance of the union's online conference which was held from 7-12 June.

The consultation was first announced in an article on the union's website last November, following Starmer's victory as Labour leader and the increasing attack on the left in the party, particularly the outrageous suspension of Jeremy Corbyn.

It's clear that the BFAWU vote wasn't a vote for non-political trade unionism - 56% of members believed the union should maintain some kind of political link.

It now has a mandate to approach all unions - affiliated and non-affiliated to Labour - to call a conference that would be open to the Labour left and socialist organisations like the Socialist Party and those who work with us in Trade Unionist and Socialist Coalition, to discuss how to organise a political force that can best represent workers and stand up to the stark Covid economic and health consequences for workers.